What makes New York City unique for so many is that it is also considered a feeling.  You will always deep down either love or hate it.  It’ll feel like the greatest experience ever.  Or possibly the worse experience.  That’s just on a day by day bases.

END_OF_DOCUMENT_TOKEN_TO_BE_REPLACED

Thinking about a nice trip to a place that wouldn’t typically be your number one destination? Visit Morocco!

My girlfriend and I went to Morocco in April and loved it. The country has a lot to offer, is very safe and the landscapes are amazing.

We flew into Cassablanca and the next day we rented a cute Fiat 500 and drove to the north of the country to the city of Chechaouen. This is an amazing city with small alleys where you wander for hours. One of the beauties of this city is that everything is blue and white. The houses, buildings and even the pavement of most alleyways. Enjoy a nice Moroccan tea on a terrace and visit their local market.

The small streets from Fez

Our next stop was the city of Fez. We parked our car at the edge of town and walked to the riad. I highly recommend staying at a riad or two, it’s an awesome experience. A riad is a combination between a hotel and bed and breakfast. They serve you breakfast in a common room, and when you arrive they always greet you with a cup of Moroccan tea.

END_OF_DOCUMENT_TOKEN_TO_BE_REPLACED

On April 15, 2019, the church of Notre Dame in Paris, France sustained substantial damage through out its structure from an awful blaze. No one knew just how badly it would all be. The fire when it had occurred had seemed to continue growing and growing. The building, where the first stone was laid down in 1163 by Pope Alexander III, seemed as if it would all be brought back down to that very first stone.  Reminding us, just because something has stood the test of time, doesn’t mean it is going to last forever.

Thankfully, by the great work of many firefighters, the building was mostly saved.  Not to down play the damage that was done and about a good amount that has been lost, but this iconic landmark wasn’t lost forever today.

A Nightmare Creates A Unifying Moment

As millions were watching, both on scene and around the world, the horror of seeing something that no one seemingly even gave an after thought of occurring, was unfolding before our very eyes. A loss for the country of France, the city of Paris and a possible loss for the World’s heritage.  Perhaps what also had the world watching and speaking in this moment was the parallel meaning it held for many of us.  A lot of times, when things are going wrong in our own lives, it seems like it’s one bad wind from all coming down amongst a rapidly burning fire.

No fire Can Bring Us Down

So, much like French President Emmanuel Macron stated about the iconic Notre Dame in sum that “we will rebuild… all together…” and we must have the same determination in our lives. No matter how strong the inferno can be.

The Common Einstein (You, us, and everyone else).

Joe: There’s something special that happens one out of every four years when the World Cup comes around. Regardless of how much war, political controversy, numerous and varying culture zeitgeist’s that are going on, it’s the only time for a 90 minute period where the human civilization seems to stop and come together.

END_OF_DOCUMENT_TOKEN_TO_BE_REPLACED

This month marks me reaching my 29th birthday.  I remind myself not just to live but to reflect.  When you reach certain points in your life you begin to realize it’s not solely just about one or the other, but through reflection comes life.  In order to appreciate where you are, one has to see who you’ve chosen to become.

END_OF_DOCUMENT_TOKEN_TO_BE_REPLACED 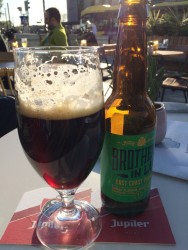 Beer is another thing Joe and share an interest in. This isn’t anything special, I know. The majority of men share a passion for beer, but the share part is a bit hard if you live on different continents. Thankfully we’ve had the opportunity to enjoy our fair share of beers together in the past (and future) but until the next time we have the opportunity, there is an app called Untappd. I’m hooked on it.

END_OF_DOCUMENT_TOKEN_TO_BE_REPLACED

Imagine a lake, undisturbed.. still.  Now throw a rock or even a pebble into it.  You can envision the lake now having waves that span out of the area impacted to an extended area.  The motion can make it pretty difficult to see what’s going on beneath the surface of the water.  And should the movement come from the ground of the water, it can make it murky or muddy it, leaving it all too unclear.

Just like life and our view of the world around us..

END_OF_DOCUMENT_TOKEN_TO_BE_REPLACED

Setting goals. When I think back at my first years in college, I wouldn’t have thought I would be working at the company I’m currently working at. Truthfully speaking, I invisioned it to be a bit more glamorous. However, I realize that I might have had an unrealistic expectation. END_OF_DOCUMENT_TOKEN_TO_BE_REPLACED

It comes in a lot of forms and measurements. Regardless of one’s associations in life, it’s a fundamental part of any relationship’s foundation.

END_OF_DOCUMENT_TOKEN_TO_BE_REPLACED

So, you may have asked yourself why “TheCommonEinstein”? To answer that in short, we’re in no way in any relation to arguably the greatest physicist to have ever lived.  Nor are we in any field of science as well.  Just friends who’ve been told “nice job, Einstein!” jokingly throughout life (who hasn’t though?).